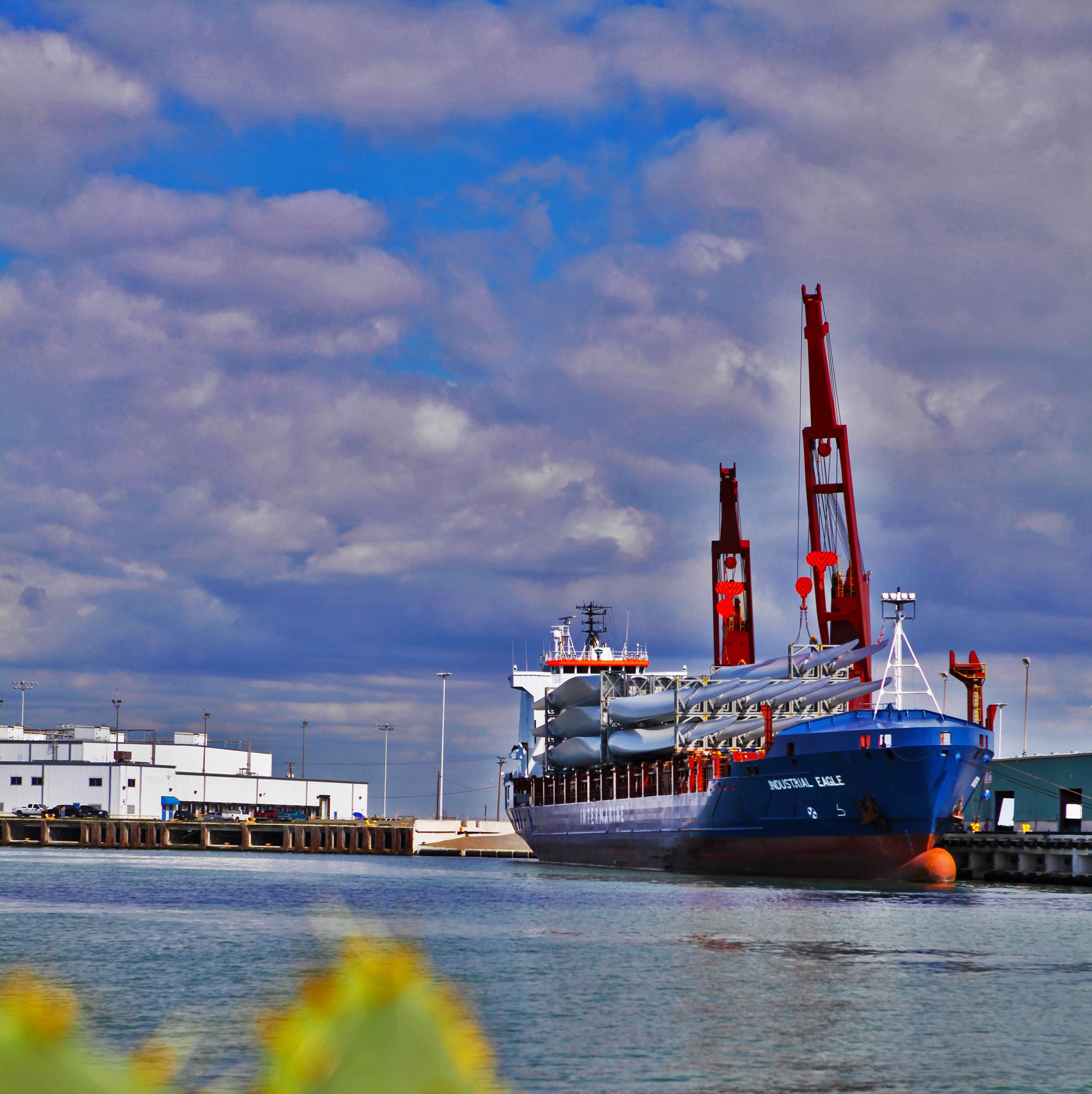 What is the Channel Improvement Project (CIP)? What is the difference between CIP Phase 1 and “the Deepening Project”?

The Channel Improvement Project Phase 1 is a US Army Corps of Engineers project to widen portions of the Ship Channel and deepen (from -47’ to -54’ MLLW) from the Gulf of Mexico through the Inner Harbor.  This project was authorized by Congress in 2007, is fully permitted, and is being funded in phases.  The US Army Corps of Engineers awarded the first construction contract for this work in the channel reach from the Gulf of Mexico to Harbor Island in February, 2019; dredging began in April of 2019 and will be complete within a year.

The Port is also seeking a separate regulatory permit from the US Army Corps of Engineers to deepen the outer reach of the Ship Channel (from the Gulf of Mexico to Harbor Island) to -75’. This incremental deepening would allow multiple Port customers who will utilize the docks on Harbor Island to fully load Very Large Crude Carriers (VLCCs).

Is there a vessel turning basin included in the current Corpus Christi Ship Channel dredging project? If not, are there future plans to dredge a turning basin? Where will dredge material from these projects be placed?

There will not be required a maneuvering or turning basin for the current layout being developed for Harbor Island.  With the development of the current concept to cut into the property to create the berths and associated slips, the maneuvering of the vessels can occur in front of the Terminal once fully dredged.

The material dredged to deepen the Ship Channel and to create the turning basin will be used beneficially to the extent possible per the Port’s environmental precepts for creating wildlife habitat.  Sediment cores have already been tested for chemical contamination and confirmed that the sediments to be dredged in the Ship Channel are suitable and safe for upland placement and beneficial use. The engineering team will evaluate sediment type and grain size to determine suitability for various habitat creation alternatives and suitable placement.

We are hearing that the Port of Corpus Christi is seeking to build a pier in the Aransas Ship Channel, is that true? If so, why? Does it have anything to do with the widening project? Is it for public use? What will it be used for? What are the dimensions of the pier?

The permit application SWG-2018-00280 requests authorization for a docking pier and parking facility along the southern side of the Aransas Channel, in Port Aransas, Nueces County, Texas. The project purpose and need is to provide a more efficient location for the harbor pilots to moor the pilot vessels to gain easier access to the ships/barges coming into the Port of Corpus Christi. Currently the harbor pilots do not have immediate access to the ships/barges and are very limited with parking near the channel entrance. This project will allow the harbor pilots to have direct access to the Gulf to board the ships/vessels coming into the Port of Corpus Christi. This is specifically for closer access by the pilots for boarding vessels at the entrance of the channel for current and future operations.

The average salinity in Corpus Christi Bay is 30 parts per thousand (ppt).  However, the salinity level is highly variable, ranging from 15 to 40 ppt, due to erratic rainfall patterns and variable freshwater inflows.

The results of three-dimensional modeling of the planned -54’ Ship Channel (CIP 1) and the proposed incremental deepening to -75’ (from the Gulf of Mexico to Harbor Island) indicated that neither project will result in a significant increase in salinity in Corpus Christi Bay above current conditions.   The modeling results show an average increase in salinity of less than 0.4 ppt, with a maximum increase of 0.52 ppt or less.  This is far less than the 1-2 ppt increase associated with other recent maritime projects in other locations around the country, including the Matagorda Ship Channel, Houston Ship Channel, Miami Harbor, Delaware River, Sacramento River, Saint Johns River, Savannah Harbor, and Charleston River.

The Port has also contracted the Harte Research Institute for Gulf of Mexico Studies at TAMU-CC to conduct additional three-dimensional modeling of the potential effects of all improvements to the Ship channel, including the current Channel Improvement Project and the future proposed Channel Deepening Project, on storm surge, tide, and salinity; once available, the results of this work will be posted on this website.

The Corpus Christi Ship Channel is dredged (maintenance dredging) on a routine basis; seagrass surveys have confirmed that there is no seagrass (or oyster reef) within the footprint of the existing channel. The increase in suspended sediments (turbidity) associated with dredging activity is very localized and dissipates very quickly (hours to days) and not persistent enough to have any significant impact on light attenuation levels in the bay.

Will the proposed Channel Improvement Project alter the hydrology of the bay system?

The results of three-dimensional modeling of the planned -54’ Ship Channel (CIP 1) and the proposed incremental deepening to -75’ (from the Gulf of Mexico to Harbor Island) indicated that neither project will result in adverse impact to tidal amplitude or velocity. The projected increase (from -54 or -75?) in tidal amplitude would be less than one inch in Redfish Bay and less than one half inch in Aransas, Copano, Corpus Christi, and Nueces Bays during the spring tide period.  In other periods, the increase would be even less.

Modeling projected a decrease in tidal velocity in the entrance channel during spring tides from 5.0 fps to 4.4 fps and overall average slowing of tidal velocity from 2.0 fps to 1.7 fps.  In the areas of the bays away from the channel, the largest change would be a slight increase of less than 0.5 fps with values less than 0.1 fps prevailing throughout the bays.  The average tidal velocities in the bay currently range from 0.07 fps to 1.67 fps and the peak velocities in the entrance channel and pass range from 0.1 fps to 3.8 fps.

The Port has also contracted the Harte Research Institute for Gulf of Mexico Studies at TAMU-CC to conduct additional three-dimensional modeling of the potential effects of improvements to the Ship channel on storm surge, tide, and salinity; once available, the results of this work will be posted on this website.

Is it possible too much of the incoming tidal water will be trapped in the deep ship channel instead of spreading out into the bay?

The physics of tidal flow are such that no change to the depth and shape of the Ship Channel could eliminate the tidal signal in the rest of the Bay.  As part of the permit application process for the Channel Improvement Project, the Port undertook modeling studies to evaluate the potential changes to tidal amplitude.  The model predicts that deepening the Ship Channel to -75’ from the Gulf of Mexico to Harbor Island would result in a maximum change in tidal amplitude of less than one inch in Red Fish bay and a change of less than 0.5 inches in Aransas, Copano, Corpus Christi, and Nueces bays under spring tide conditions as compared to current conditions (-47’).

The Port has also engaged Dr. Jim Gibeaut at TAMUCC’s Harte Research Institute for Gulf of Mexico Studies to conduct additional storm surge modeling to inform design decisions for the development at Harbor Island. The results of that work are expected in late spring, 2019.

One component of the dredging protocol is to evaluate and conduct sampling of the material that is to be dredged.  This has been done extensively as part of the Corpus Christi 54’ Channel Improvement Project, and the sediments in the Ship Channel have consistently proven not to pose a threat of contamination.

Most of the Dredge Material Placement Areas (DMPA’s) that exist and are utilized within the Port are areas that have been in existence since the channel was dredged to -47 feet in 1970s-80s.  The levees within these placement areas are raised periodically to allow for placement of more material, but for the most part, the footprints of these placement areas have not been otherwise expanded.  The Port and US Army Corps of Engineers (USACE) collaborate on placement of material to maximize use of existing placement areas.

The USACE also explicitly prioritizes beneficial use of dredge material, per the following passage from their website:

“An important goal of managing dredged material is to ensure that the material is used or disposed of in an environmentally sound manner. Much of the several hundred million cubic meters of sediment dredged each year from U.S. ports, harbors and waterways is disposed of in open water, confined disposal facilities and upland disposal facilities.  Most of this dredged material could be used in a beneficial manner instead, such as for nourishment of beaches with clean sand or development of wetland habitats.The National Dredging Team(NDT) recognizes dredged material as a valuable resource that can be used in environmentally beneficial ways.”

Dredge material from Port maintenance and new work dredging is placed in a variety of upland and aquatic habitats (including estuarine and tidal marsh) where erosion has occurred due to acute disturbance (e.g. storms) or chronic impacts (e.g. currents, ship wakes). Studies indicate recovery to pre-placement conditions occurs within a year from the temporary disturbance from placement of dredge material.

The Port of Corpus Christi Authority works closely with the Coastal Bend Bays & Estuaries Program on bird studies and programs.  These programs include providing access to CBBEP staff to conduct bird surveys and do predator management as well as providing funding for creating, enhancing or restoring habitat and nesting areas. All of the dredge material disposal sites designated for the Channel Improvement Project are in regular use.  Dredge material is conveyed into these areas via a pipe carrying a slurry of sediment and water; any disturbance to birds utilizing the placement area is localized and temporary. 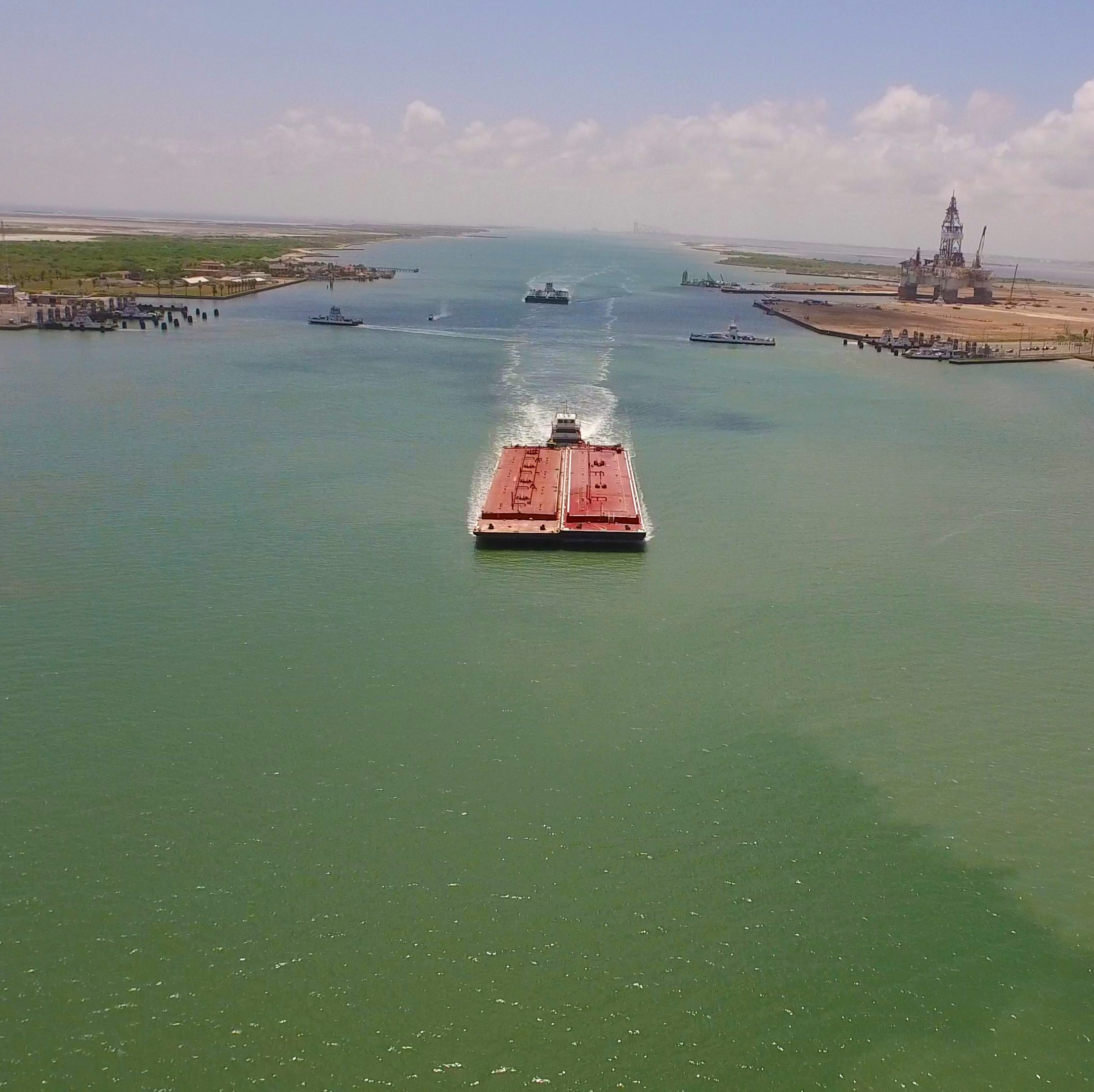 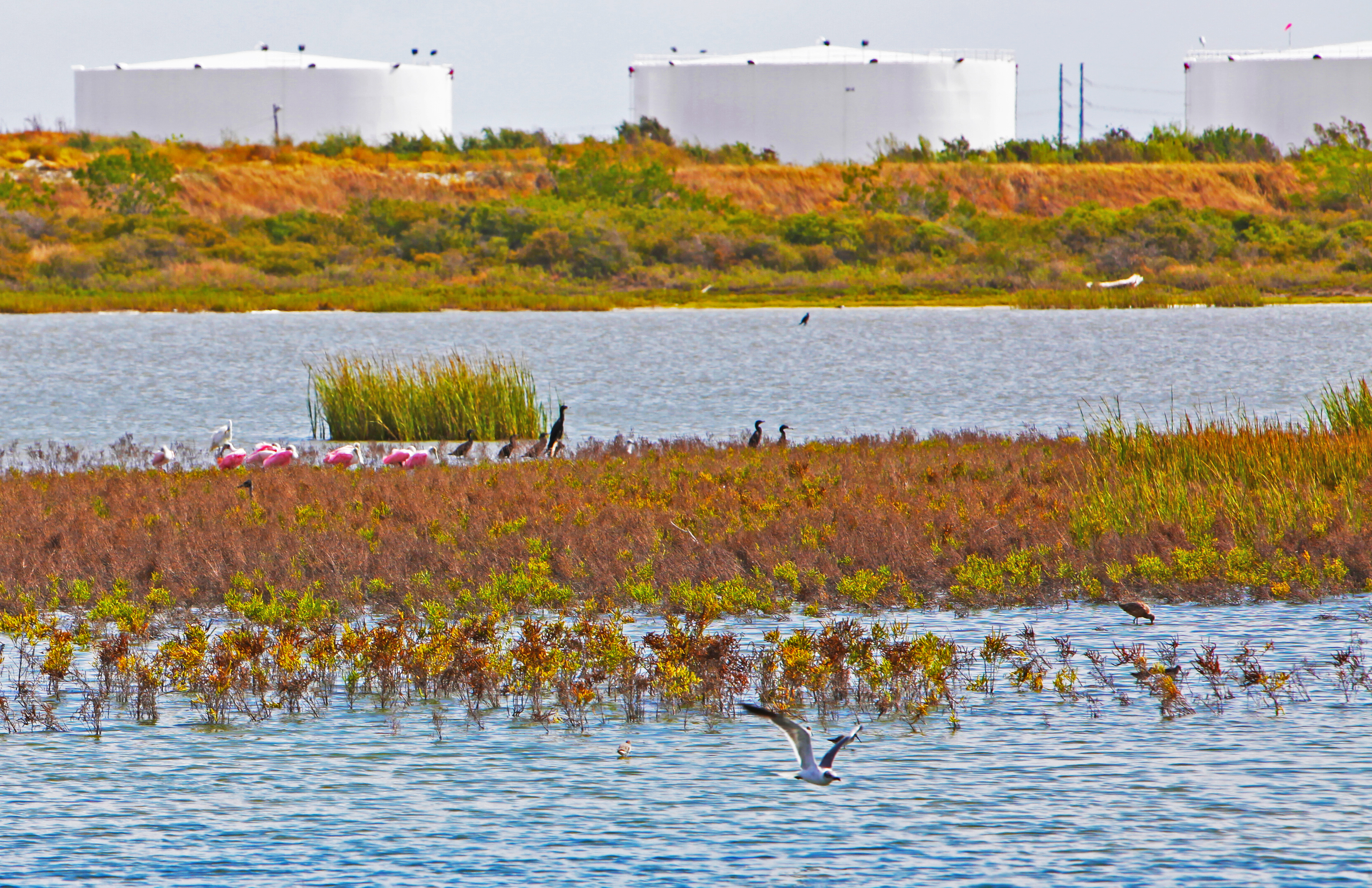 Will deepening the Ship channel amplify storm surge? How will you protect storage tanks on Harbor Island from storm impacts?

The current working concept for the Harbor Island terminal includes only minimal tankage; most storage will be located in Aransas Pass or at other locations further landward. Any infrastructure built on Harbor Island will be designed on the basis of conservative storm surge and sea level rise scenarios. In addition, the Port has engaged Dr. Jim Gibeaut at TAMUCC’s Harte Research Institute for Gulf of Mexico Studies to conduct additional storm surge modeling; once available, the results of this work will be posted on this website.